My friends Kendra and Kapil recently got hitched at this epic Hindu-Christian Indian-chow New-England-lobster-bake affair in Maine. Two wonderful, loving families brought together by two amazing people WHO SERVED UNLIMITED AMOUNTS OF SHELLFISH AND BUTTER CHICKEN HOLY F*CKING HELL THAT WAS AMAZING.

I’ve limited experience with New England food culture – not counting all of the lobsters and clams and oysters I destroyed – so I was unprepared for the simple, addictive charms of the dessert they served at their reception, the Whoopie Pie.

A favorite in Maine – it’s sugar and egg whites and shortening and vanilla, whipped and pressed between two chocolate cake rounds. Light and fluffy and rich and dangerous. I’m pretty sure I ate at least a half-dozen over the course of the evening. No regrets, save for the lack of them once I returned to Chicago.

The following week, Kendra’s family’s friend Nancy came to my rescue with an email that included a brilliant, easy recipe and these words of comfort and wisdom:

I promised you a recipe for the Whoopie Pie cookie you were in ecstasy over on Sunday night.  This is the Real Deal.  Do not even think about trying the marshmallow fluff substitute recipes that are out there.  These freeze beautifully, and get better after a couple days when the filling develops a kind of crisp exterior that gives when you bite down – a little bit of Maine heaven.

I asked Kendra if she wouldn’t mind putting some together with me for The83k – and she graciously agreed. But then I realized, with all of the tastiness we were making, we’d be leaving someone out. Someone who can’t eat chocolate. Someone very, very important.

Chester is K&K’s animal friend. Adorable, goofy – and unable to eat any amount of chocolate goodness. Which seemed unfair. I mean, LOOK AT THAT DAMN FACE.

So I asked the internet, and it turns out blogger and cookbook author Hannah Kaminsky already had an answer: dog-friendly carob sandwich cookies with mashed potato filling – what she calls WOOFIE PIES.

So we decided to make both.

In a house full of beautiful stuff, as Kendra and Kapil’s is, it was hard to stop looking at everything and get started on the task at hand. Especially after we started on the booze. But then a certain someone reminded us why I was there in the first place.

So while I creamed some shortening and sugar (you can use a fork – hard – or a hand mixer or stand mixer – easy), Kendra mixed some flour, baking powder, baking soda, salt and cocoa together.

We added some egg yolks and vanilla to the shortening mixture, then started integrating the dry components along with something called sour milk (which is not the same as buttermilk, apparently.) 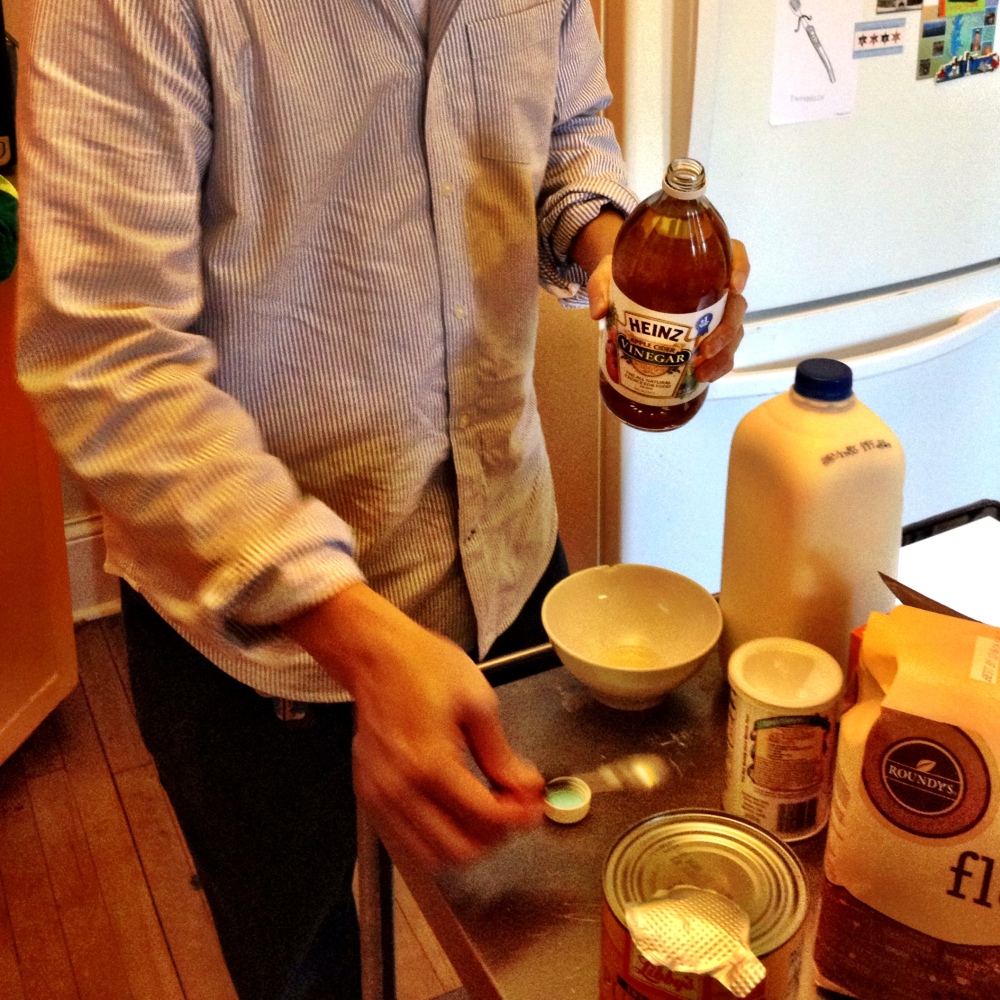 A little vinegar, a lot of whole milk. It’s weird. But it WORKS.

Once everything comes together, we dropped tablespoon-sized rounds onto parchment paper and baked those suckers.

RECIPE NOTE: If you’re baking with a friend AND an adorable animal, one of you can start putting together the filling (sugar, egg whites, shortening, salt and vanilla)…

…while the other one takes more pictures of the dog. 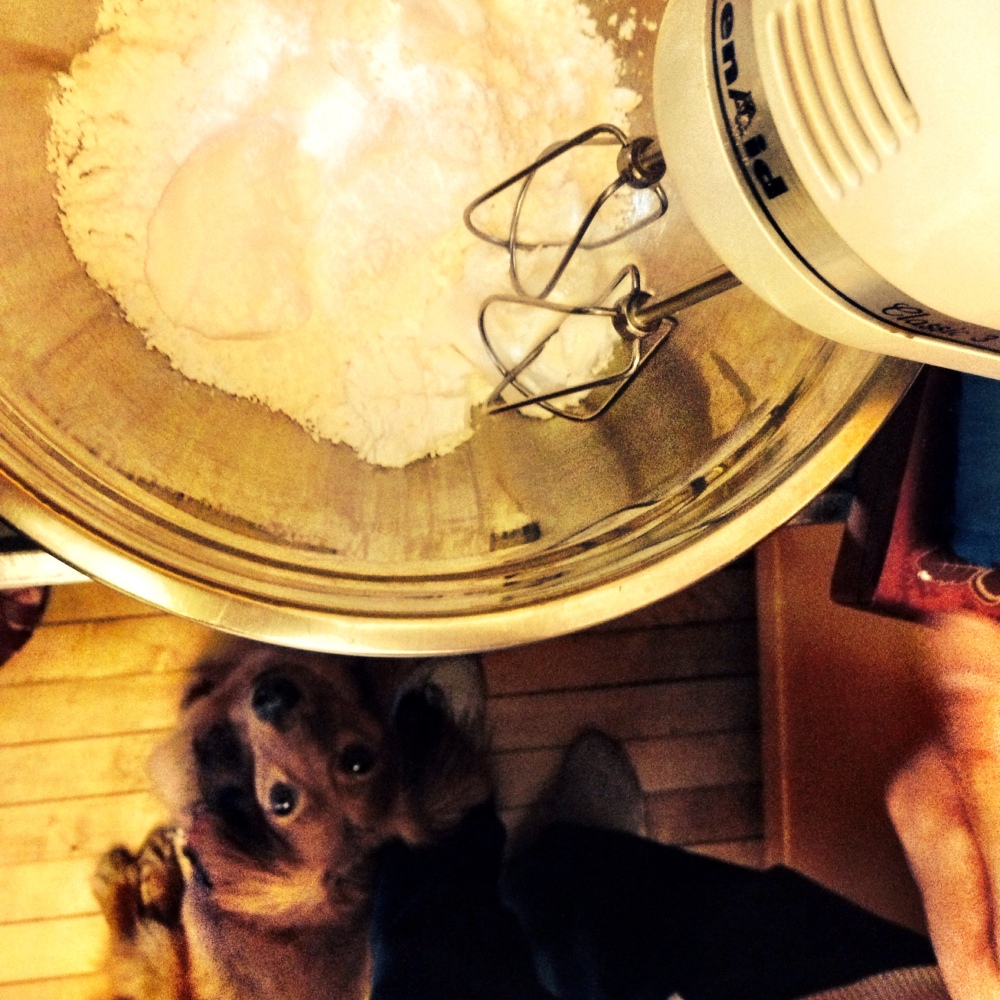 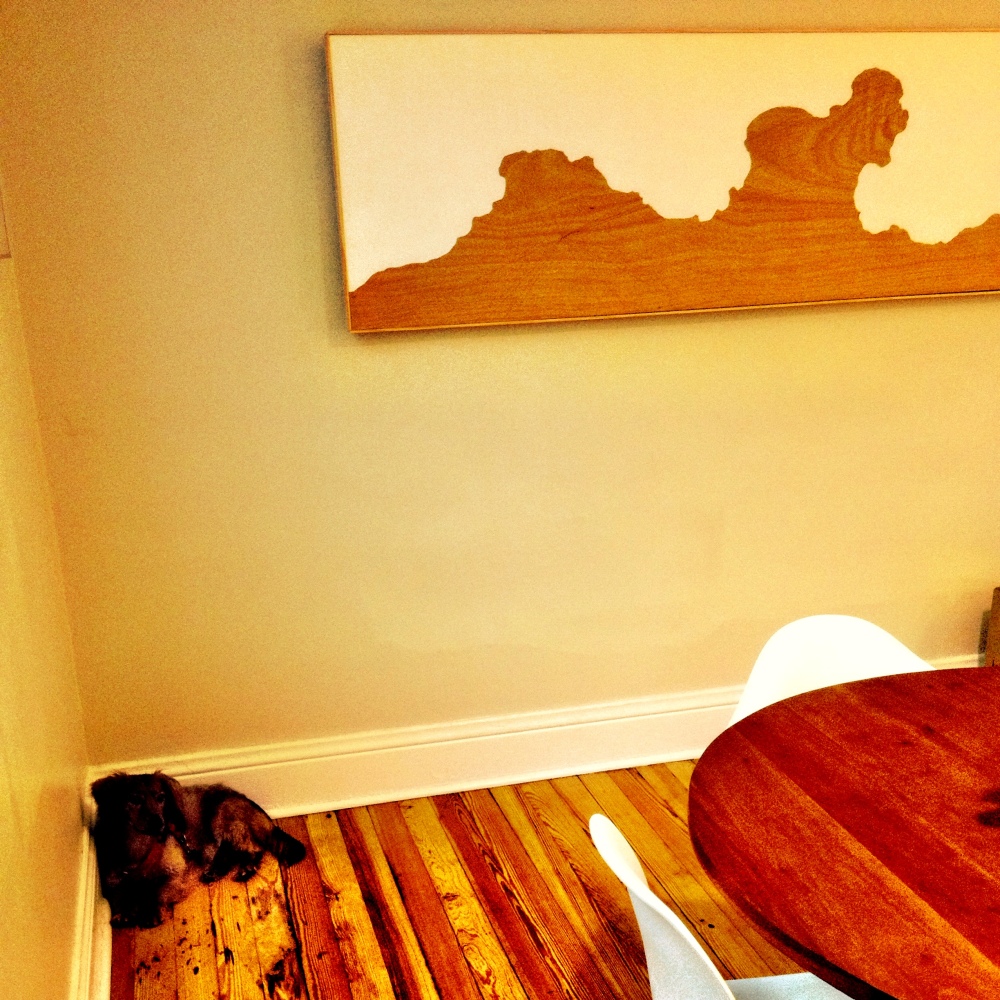 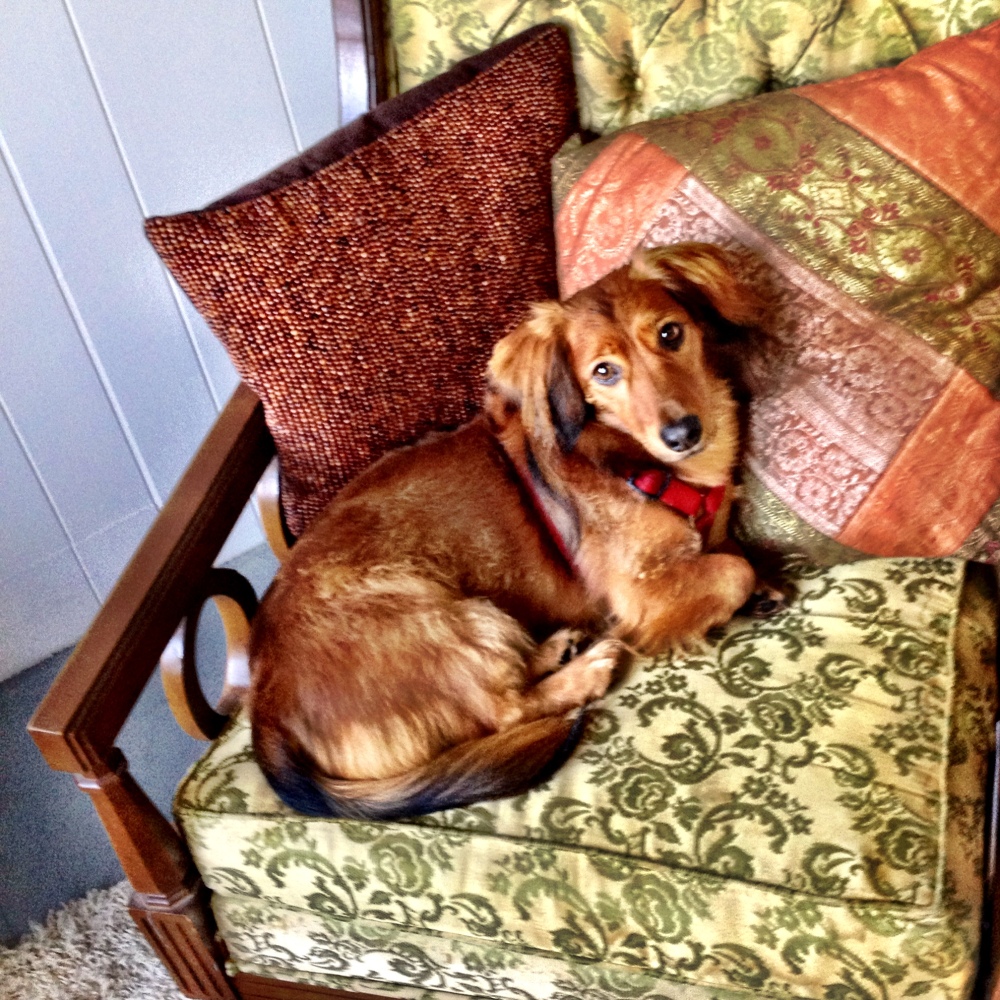 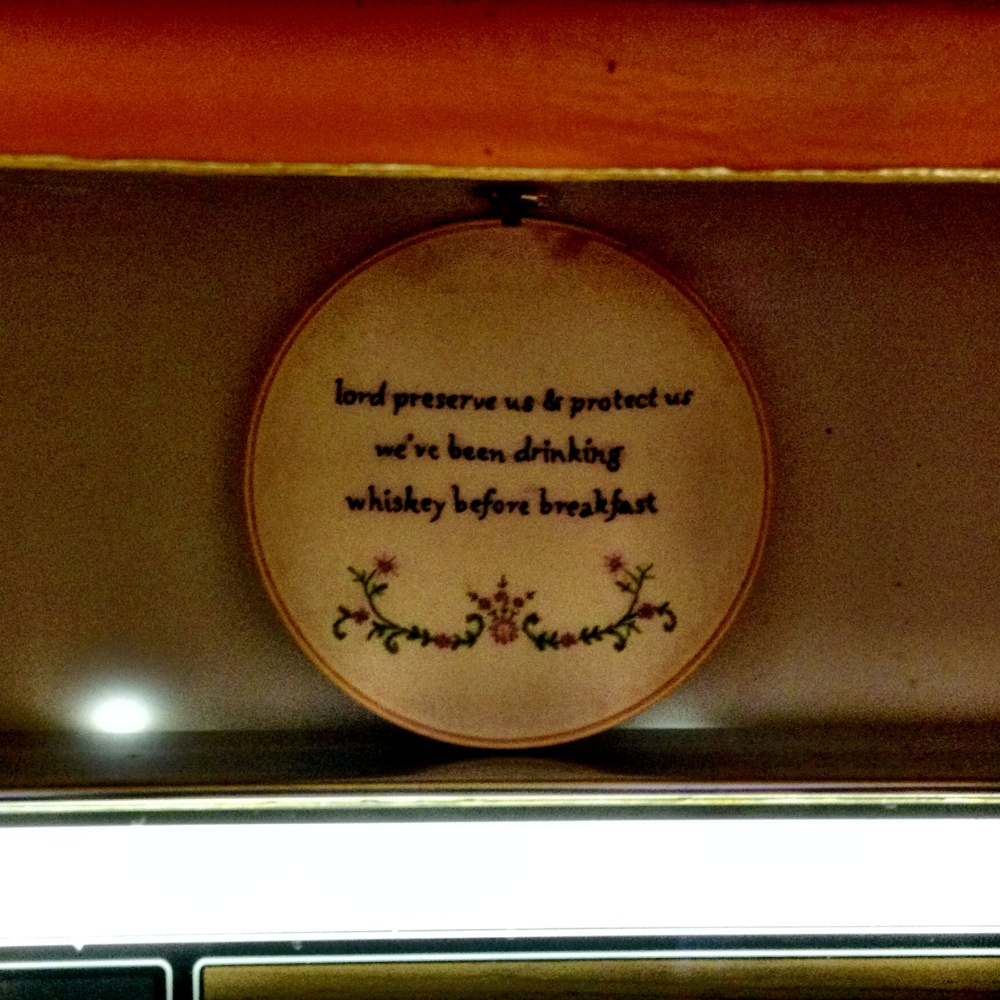 You’ll probably need two baking sheets to wind up with about 24 cake rounds. You should probably make yours a little smaller than I did.

Assembly is at once super easy and impossibly difficult, since the urge to start stuffing the filling directly into your face is hard to resist. IT’S WHIPPED SUGAR AND FAT, people. 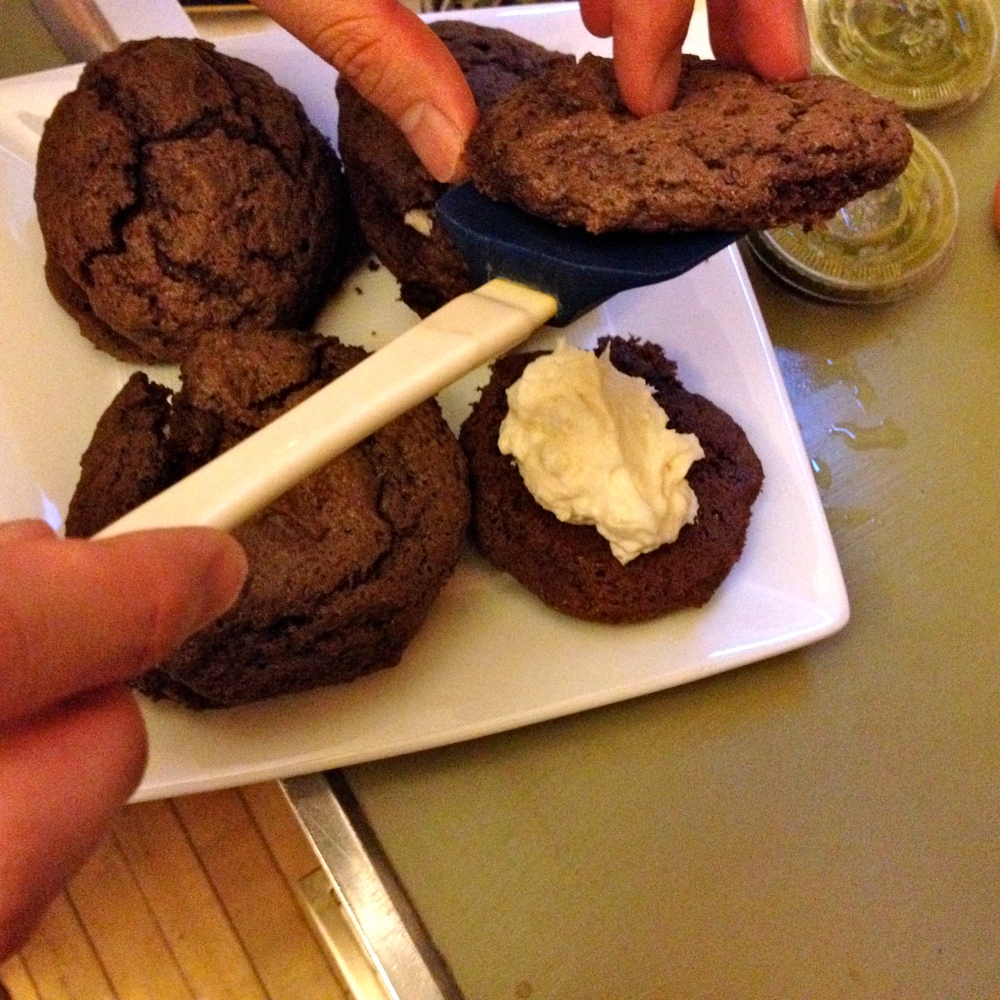 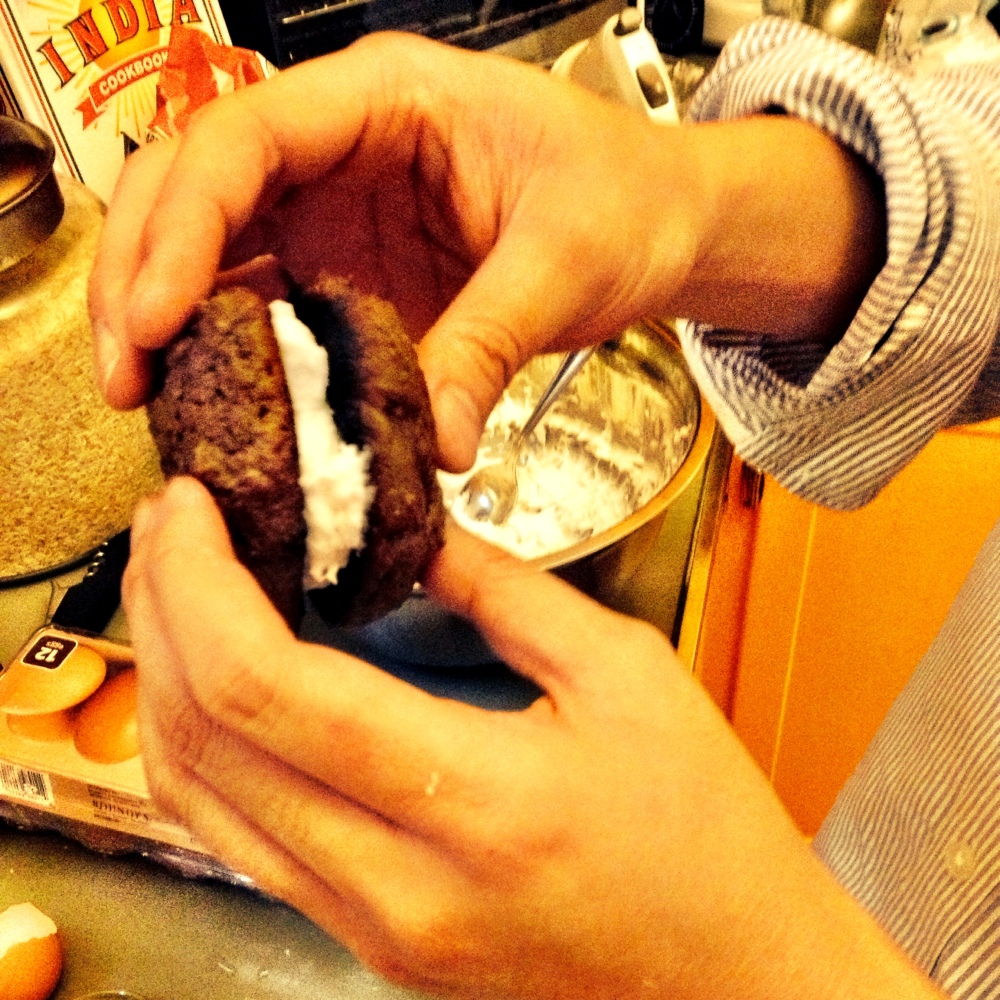 They turned out okay. 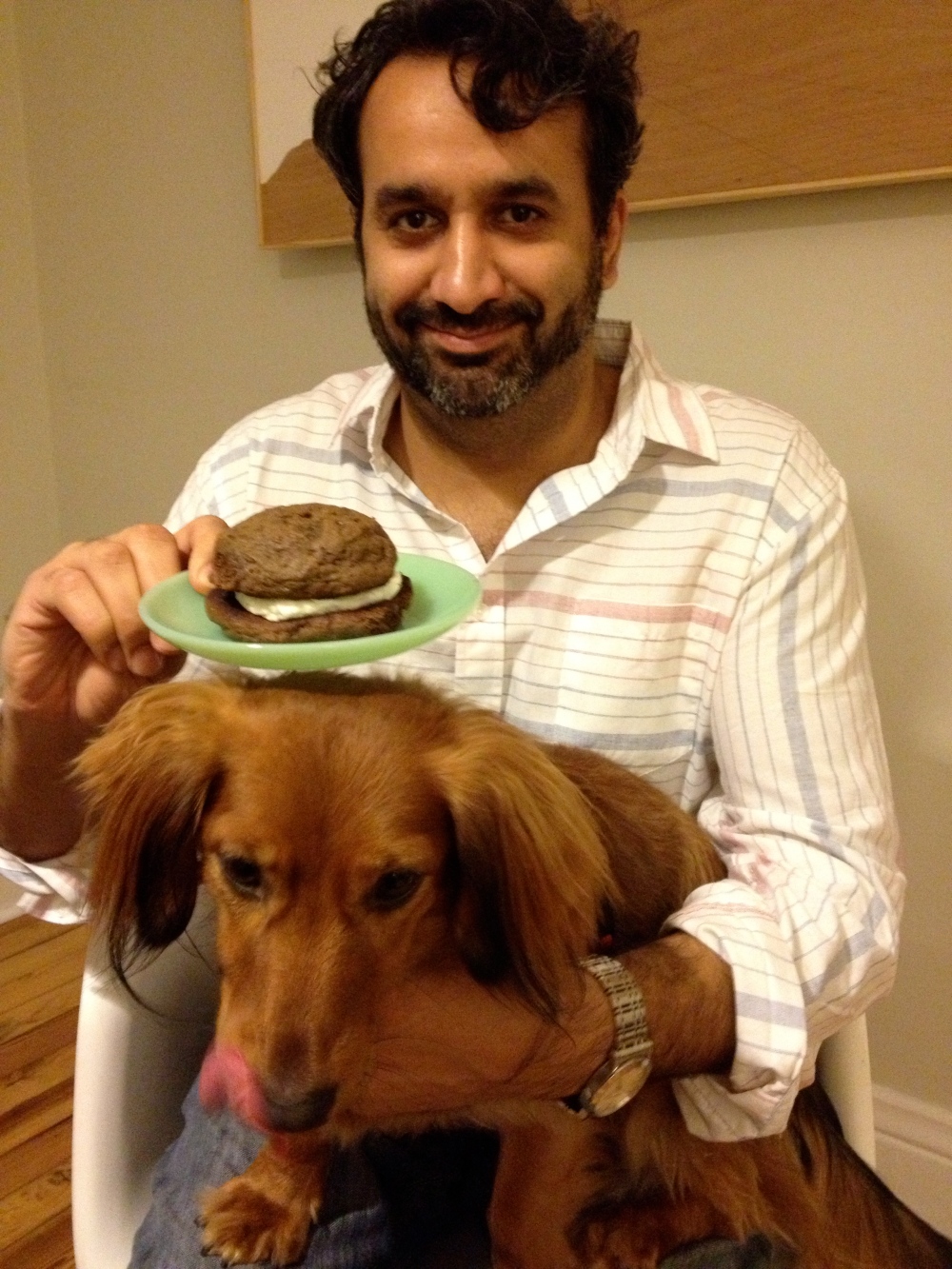 We were going to try to make these Thanksgiving-ish by adding a cranberry reduction to the inside – and you’re welcome to do that if you want to add some sweetness and tartness – but to be honest, these don’t really need anything else but a little care and a lot of people you wanna make happy. Thanks, Nancy!

After we finished with our treats, we stopped torturing Chester with our laughter and our baking smells and got to his:

I detest puns. But I was pretty sure Chester wouldn’t have any problem with them, or the food we were about to make him.

Kendra chopped and boiled some potato (make sure to peel thoroughly and remove ALL green parts – they’re not good for dogs) while I put the dry and wet parts of the carob cookies together. (Flour, baking soda, carob powder, baking powder / carrot juice, pumpkin puree, vinegar and olive oil.) 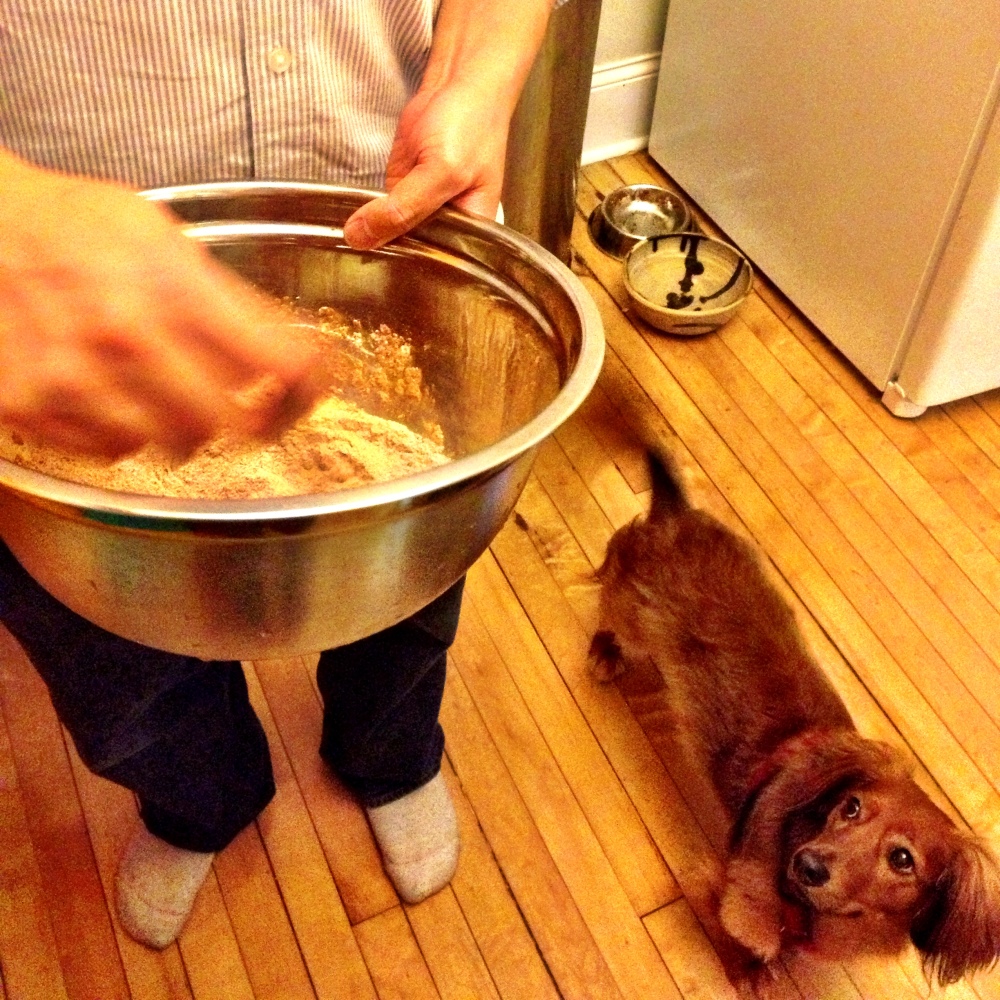 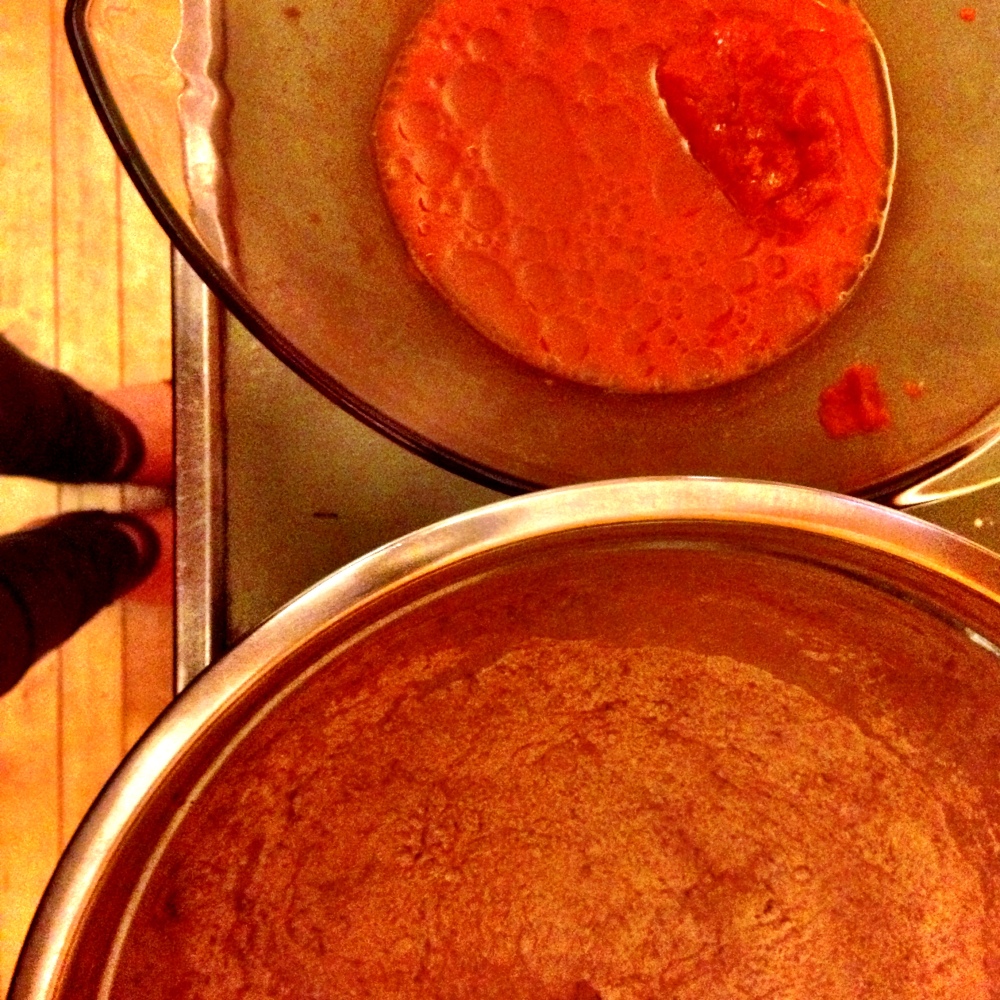 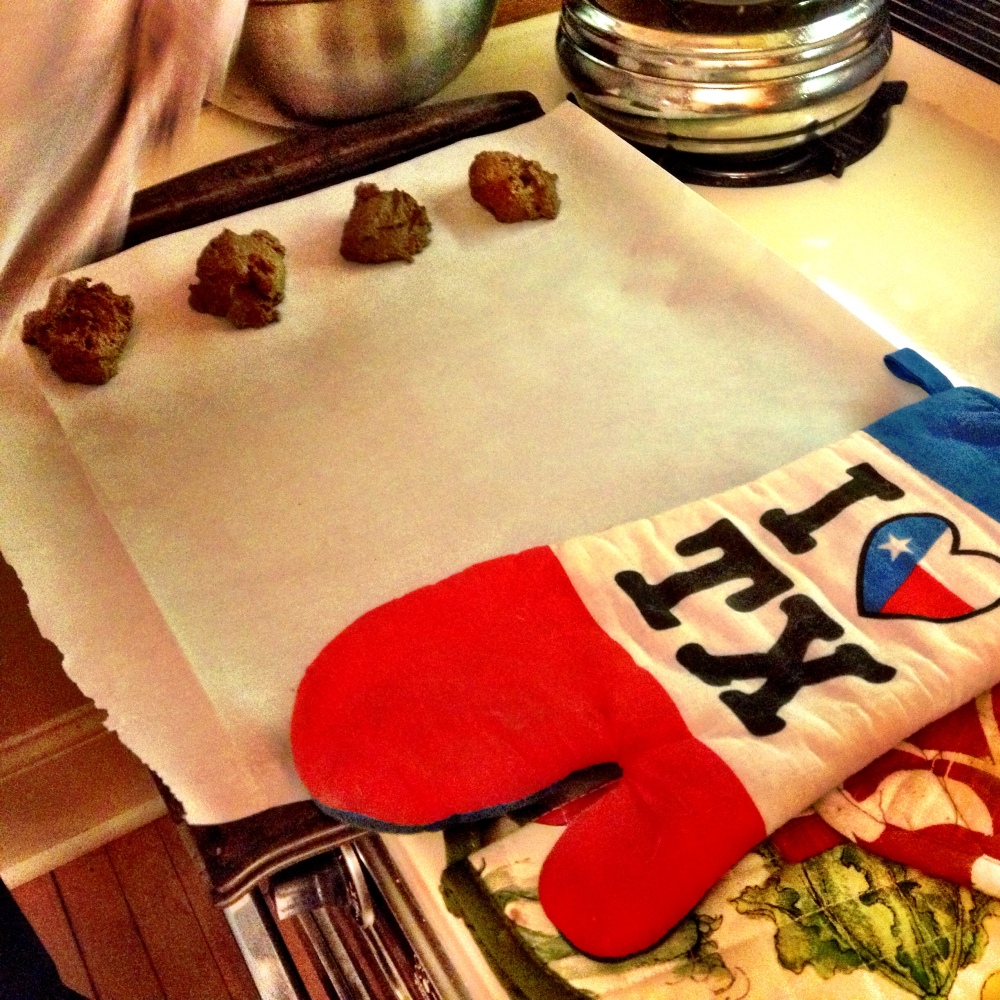 We dolloped these onto sheets and baked them off – 6 to 9 minutes – and then filled them with the mashed potato. 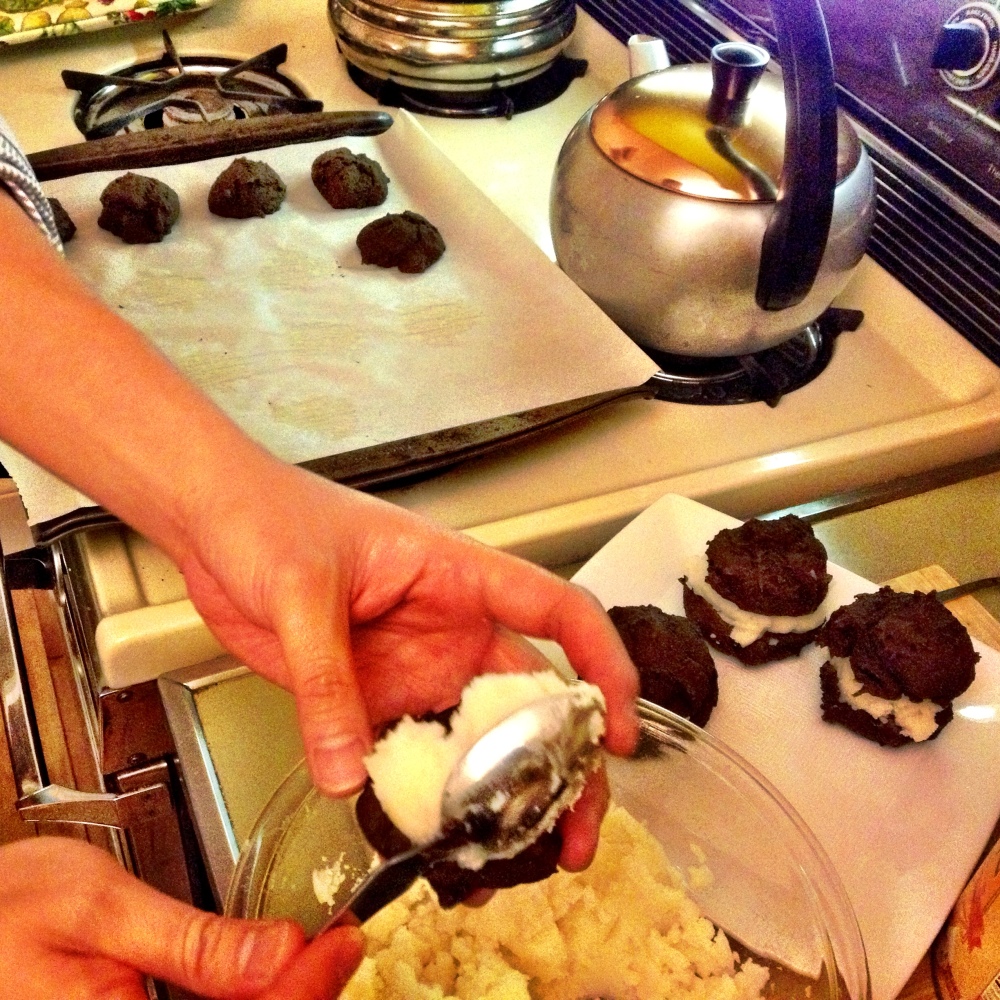 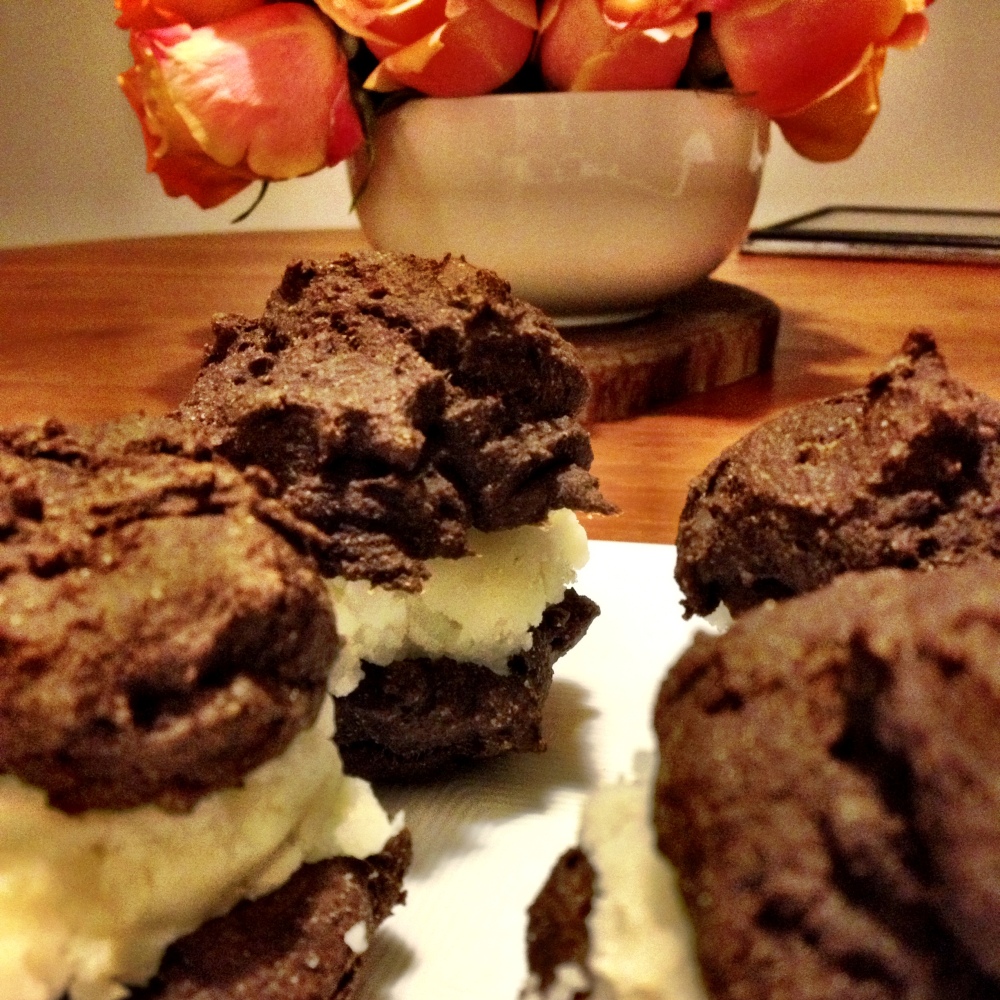 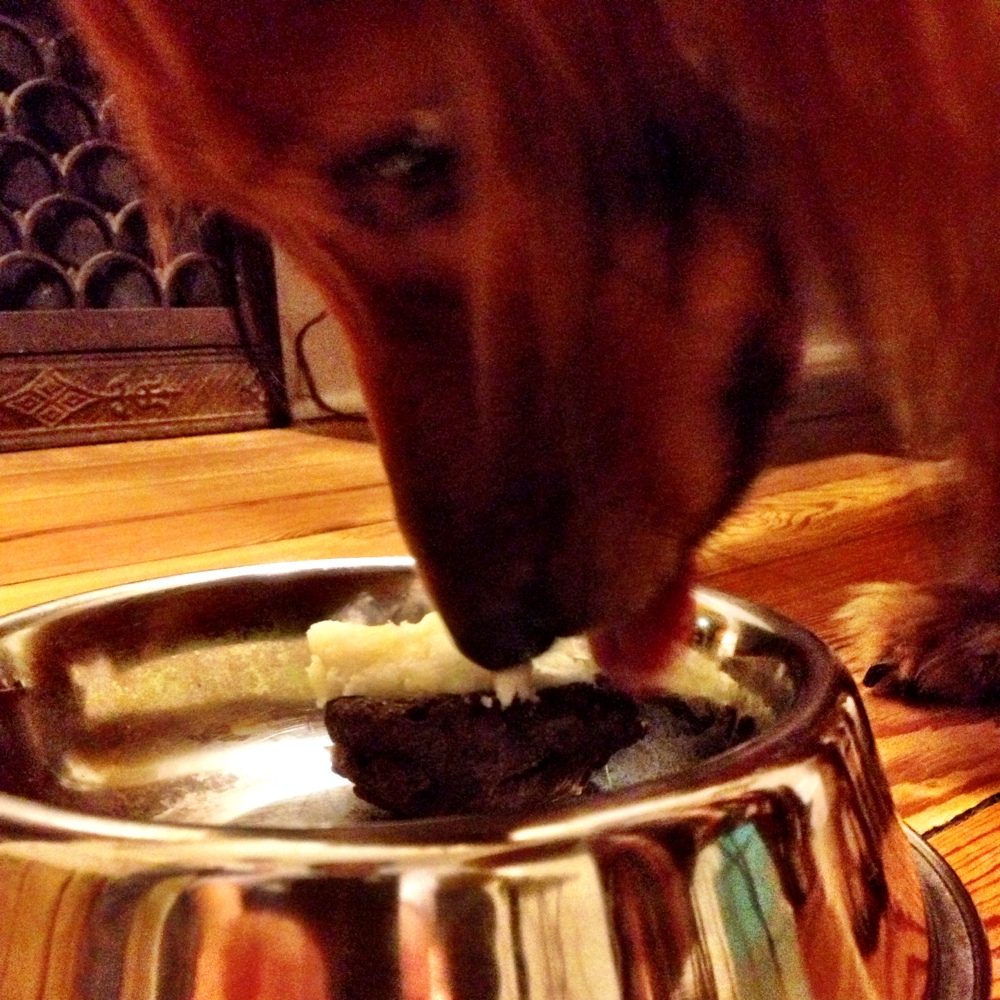 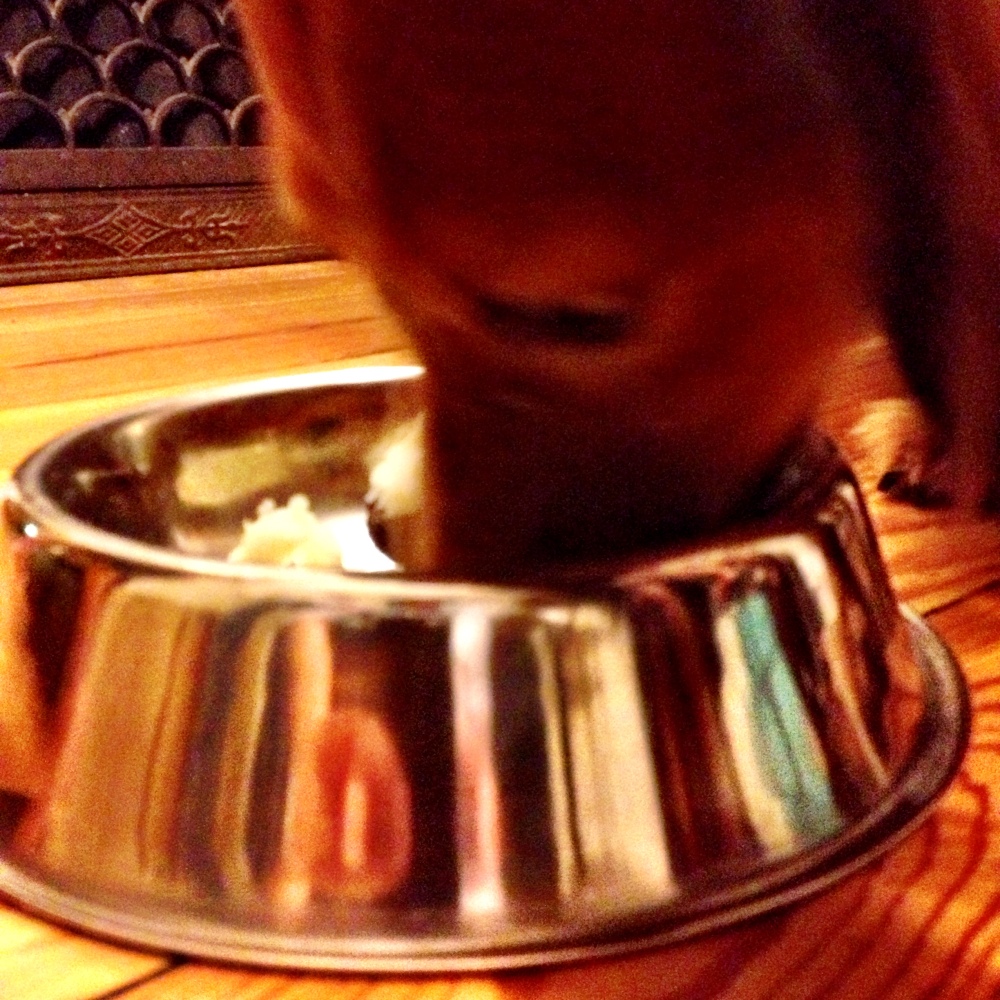 A lot. Chester is a Clean Plate Club PLATINUM MEMBER.

Your friends – both human and furry – will appreciate your efforts in the kitchen, whoopie- and woofie-pie-wise. We had a great time. We hope you will, too. Enjoy getting whooped – and woofed! 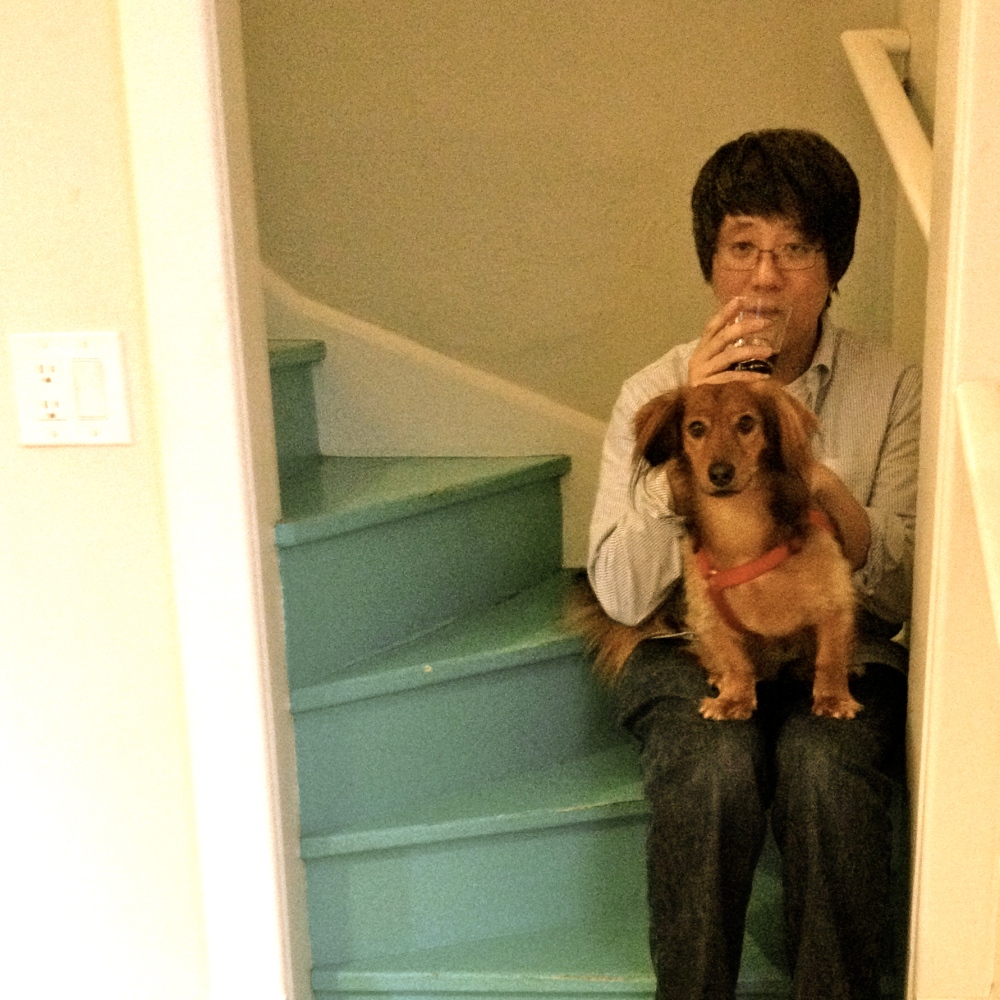 Beat egg whites until light and fluffy.  Cream shortening and sugar until smooth and add to beaten egg whites.  Add vanilla and a pinch of salt.  Fill between 2 cookies, sandwich-fashion.

The Woofie Pies recipe (from Hannah Kaminsky) can be found here. Your pups will gobble it up. Believe it.